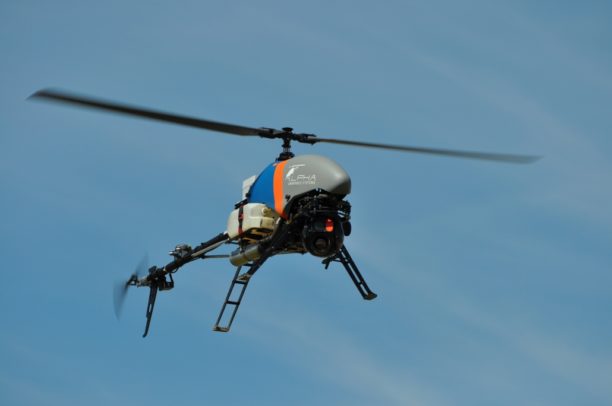 It’s a complex solution with great implications for a wide variety of applications – from military to humanitarian. A spokesperson from Simplex says that the Unified Flight System not only enables more flights – but makes them safer.

Alpha Unmanned and Simplex have built the system for a particular customer – but as the safety case is proved in Israel, the Unified Flight System may soon be used around the globe.

The Following Is an Alpha Unmanned and Simplex Press Release.

Madrid-based Alpha Unmanned Systems, SL and Tel Aviv-based Simplex Corporation are pleased to announce their partnership to enable multiple helicopter UAVs to be flown concurrently, by a single operator and ground control station, and beyond visual line-of-sight (BVLOS). The two companies are developing this unique capability for an Israeli customer.

In this critical time, drone usage is increasingly important for urgent missions. The ability to fly multiple drones simultaneously with minimal manpower is essential. Many concurrent and complementary missions can now be flown at the same time and by the same operator, from urgent medical delivery to surveillance and quarantine enforcement. Eric Freeman, CEO of Alpha Unmanned Systems, states, “Alpha is very pleased to work closely with Simplex in the development and deployment of this Unified Flight System. Now, a one trained operator can operate up to 6 Alpha 800 helicopters and 4 additional drones, each Alpha helicopter executing its own autonomous mission while the system manages the shared airspace and flight parameters dynamically.” The Alpha 800 gasoline-powered helicopter UAV is a top choice among First Responders as its 3hr autonomous flight time, 50km range and 3kg payload capacity make many types of missions possible. The platform is used in ResponDrone (https://respondroneproject.com/), an EU H2020 initiative, and by Spain’s UME (Unidad Militar de Emergencia).

Shay Levi, CEO of Simplex, states, “We are delighted that our CAAI certified and the highly effective system allows operating multiple concurrent Alpha 800 missions while significantly increasing flight safety.” Simplex, a Tel-Aviv based company, works to make multi-UAV flying a reality. In partnership with Alpha and with other leading UAV manufacturers, its systems are in use today in Israel, the world’s most demanding UAV marketplace.

Founded in 2014, Alpha Unmanned Systems is a privately held Spanish company based in Madrid. Its gasoline-powered helicopter platforms are used in more than 6 countries, for a variety of surveillance, border control, mapping, and precision agriculture purposes. The Company also provides Advanced Engineering Services for some of the world’s largest defense-related companies.

Established in 2004, Simplex, a privately held Israeli company, has developed, integrated and delivered hundreds of cutting-edge command and control solutions for the defense, security, agriculture and mining industries. In the past 5 years, Simplex has focused on developing autonomous capabilities for ground and unmanned aerial systems.